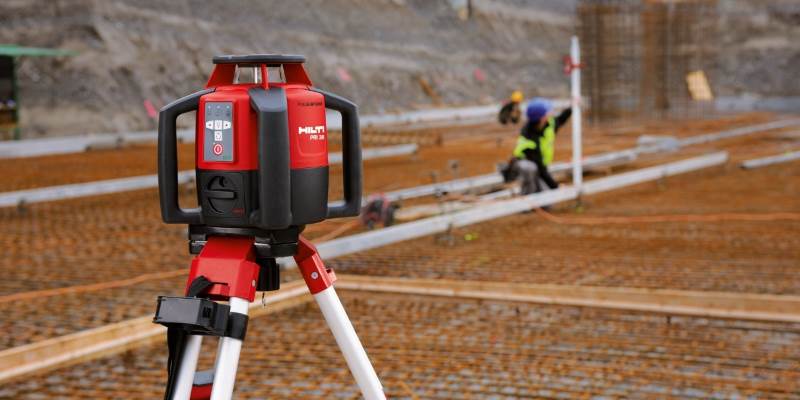 Wait, what? Laser levels? Perhaps I was thinking of the turnip.

No, laser levels are newer than that, but they did evolve from a more basic and earthy technology: the water level. This is a tube of any kind that is flooded with water. The tube is kept level, and it naturally takes the curvature of the Earth into account.

The primitive water level gave way to the spirit level, which developed in the last couple of centuries in the last millennium. The modern spirit level looks like a long slide rule or ruler with two or three vertical plastic tubes with bubbles inside. Maybe you’ve seen an older cousin or your father using one of these. And, they’re still in use.

However, the laser level is now the favored level, particularly among those who have a lot of heavy-duty construction to do. Not only is it fun to play with lasers, but one gets great results this way, with no water spillage to fuss with.

This is a guide for people who are strongly considering buying their first laser level. It’s also great if you brought one home from the depot yesterday and need to learn the ropes.

Here are 7 things to know about laser levels.

This little guy or gal functions about the way its name makes it sound—it creates a nice clear point on the surface you’d like.

Some point generators come with wall mounts and are compatible with tripods. As you may guess, these are for short-range use and quick and small jobs.

This also project little points or dots on the surface in question. Most of these have 3 or more beams, meaning three dots in use at one time.

Plumbing (making sure a horizontal surface is flat) walls, making sure floors are level, and moving reference points from one surface to another are all good tasks for these.

A dot laser is generally a bit more useful for a variety of needs that arise than a point generator is, but the two items aren’t exactly dissimilar.

Now we’re getting into some of the items that frequent Bob Vilas might find to be their speed, as well as contractors or part-time pros.

A line laser kind of looks like a thermos that Cylons from Battlestar would use. They’re really about the size of car batteries, and are up for some serious work.

Like dot lasers, line lasers typically have a number of beams, with 3 being a sort of standard, with the fancier ones going up from there.

Some of them can make x and y lines that meet at, of course a 90-degree angle. These can be great for doors and windows and wall track layout.

Now we’re into the Cadillac of laser levels—the rotary. This guy looks like if any two droids from Star Wars had a baby.

Anyway, this is what you want for hardcore jobs, including pesky outdoor work. That’s because most laser levels have visible of close to 1,000 feet, some get all the way there, and some go to 2K.

These almost always come with wall mounts and tripods. Because they spin around, they make work more possible for one person.

Squaring, leveling, and aligning are all possible with these, which are usually self-leveling and give you horizontal and vertical laser lines.

Calibration is one of the things about laser levels that you may not think of before you get started. What it means is making sure the laser beam goes precisely where it’s supposed to rather than a tiny bit off to the left or right.

Yes, the factory does get the level calibrated for you, but there’s more to life than that, man. It can get jarred in transit, which will mess with the calibration.

Calibration is much less of a big deal that you might think, and you’ll benefit from [our quick guide]. Re-calibration is necessary not only roughly every six months, but any time the thing gets jarred, which brings us to our next thing you need to know about laser levels.

Now, this might be the kind of thing that people fudge all the time, but it is important for the operator to be schooled. If you’ve handled construction equipment in general, using a laser level will be pretty doable.

You should probably read the manual first.

One thing to remember about the unit is that vibrations are death to it. That is why making sure the surface you have it on is flat. A tripod is great for this reason. All of this is explained more fully in our maintenance article.

That brings us to our next guideline for laser level use.

Some outdoor leveling jobs are done for construction of a garage or deck. While these should be all right, you get into more of a danger zone when you get out into the wild.

If you find yourself thinking of doings some construction on dirt, gravel, or areas with brush or brambles, you may want to be cautious using your laser level.

Remember, you have the manual spirit level to use. The problem with going laser is that dirt can be a serious problem.

The unit falling over is bad news—not only do you have to recalibrate when that happens, but it can do serious damage.

Whether or not you skimp on safety gear in other instances, when using a laser level, a guideline that isn’t so optional is using safety gear.

This will include heavy clothing, a dust mask, and safety goggles. You’re using lasers, people!

Just as when you’re ordering chili. It’s not a bad idea to know the difference between red and green. In this case, these are the different beams used by laser levels.

What’s the difference? I’m going to cut through the suspense: green are better. One of the main reasons for this is the one you’d guess: it’s easier to see.

Visibility is determined by where light falls in the visual spectrum. Green light is around 540 nm, making it easier to see than red.

Green beams can be seen at round about 3,000 feet, quite a bit longer than red. If you’re looking at a particular unit that has a red beam and you like the price and the various specs, and you’re doing a lot of indoor work, go ahead and go red.

DEWALT and Bosch tend to be the best brands when it comes to laser levels, particularly with rotaries.

But because of the specs of these machines, it’s a good idea to prepare before ordering online or going into the big box store. Read reviews from a variety of sources.

Using a laser level can be very rewarding, since you know you’re getting the kind of precision only a laser can deliver. Some varieties are relatively inexpensive, though a level can be something of an investment once you get into rotary models.

They’re easy to learn and easy to calibrate. The only difficulty comes in handling them properly to keep out dirt and to ward off vibrations.

You have to take great care of your beam machine, and you have to have the discipline to re-calibrate or otherwise maintain the machine if it undergoes any damage whatsoever. But if you want to get the job done right the first time, lasers are a great strategy.